Since my group has recently delved deep into the Cthulhu Mythos in our Call of Cthulhu game it wasn't much of a transition this past week when we broke out Arkham Horror to give it a go.
Expectations could not have been higher, each of us had heard nothing but glowing reviews of the game.  Considering a few of the members of the group are avid Board Game fans, the bar was set pretty damn high.  One reason that I was ecstatic when my wife got me the game was that I love co-op board games.  The entire concept is still relatively new to me, but Defenders of the Realm really got me hooked on the concept.  So the question really became not just is the game good, but can the game possibly live up to the unrealistic expectations.
The first thing you should know about Arkham Horror if that the game is big.  There are a lot of parts to the game and it takes up a lot of room.  Make sure you clear of your whole table if you decide to break out the game because you will need every inch of the space.  If you choose the path of madness and play the game with all the expansions you better clear off two tables and push them together!  Since we were just playing the base game we didn't have any problems fitting everything on the table but that was all we fit on the table.  The pizza had to be put elsewhere.

The first thing we did was chose investigators.  We opted to do this at Random, but I don't see any problem cherry picking the ones you want.  I've heard people say that the Investigators are for the most part balanced, and that is probably true but there are certainly some that are better than others.  Mandy Thompson (The Researcher) for example is great.  I didn't get her though, I got Dexter Drake the Magician.  To round out the part Bear got Darrell Simmons the Photographer, Revil got Ashcan Pete the Drifer, and the Professor got Joe Diamond The Private Eye (Private Dick jokes were rampant).  Everyone except me was seemed pretty content with their character.  I'm not crazy about the Magician.  His special ability allows him to draw two spells and choose the better one, but the sanity loss from casting spells adds up fast so I didn't use them a lot throughout the game.
Next we chose our opponent, the Ancient one we would be trying to stop.  Like Investigators, not all Ancient Ones are created equal.  They all have different abilities, attacks, and Doom Tracks (The amount of time before they appear and you have to fight them).  The rules say draw randomly, and this isn't an instance where cherry picking would work;  random is the only way to go.  The Ancient Ones abilities really make the game different depending on who you get, another aspect of the game that adds to the replay value.  We ended up with Nyarlathotep or as he was known at the table, the Asshole.   As Ancient Ones go he actually seems to be fairly beatable.  His worshiper ability might actually make things easier because it puts the weakest monster (Cultist) back in play over and over.  Not that we were complaining! One thing that did come to bite us in the ass was his attack, but I'm getting ahead of myself. 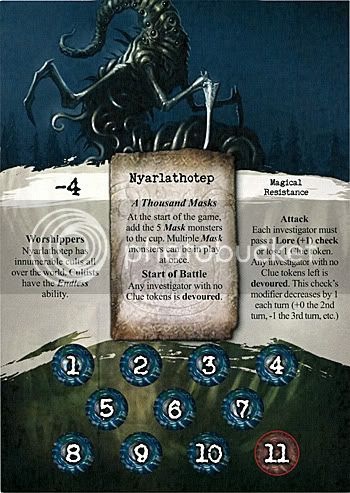 Once everything was set up we divided up the responsibilities for running the game.  In my opinion this is the only way to do it as there are many.  We had one person in charge of Mythos Cards and the Ancient One (Me), another person was in charge of monsters and gates (Bear), Revil was in charge of Money, Items and Clue Tokes, and finally the Professor handled all the encounter cards (and read them in a very dramatic voice which made the game even better).  Spread out like that the responsibility weren't bad at all, ensuring that no one person became overburdened. Each person has to look to their own character afterall, and there are often a number of things to do during the upkeep phase of the game that you can't forget about.
With everything set up and each person knowing their roll we place our character markers on our home space and got started.
Quick note: There are two different versions of the board, the older dark one and the newer light one.  I have the newer light one.  Both versions can be seen below.

The game opened up with a gate opening in the black cave.  This wasn't a problem (yet) and we all went about collecting as many clue token as possible so that we could use them to close gates and, if necessary, battle Nyarlathotep.  The black caves quickly became a problem as a second gate was drawn the following turn resulting in a monster surge.  This monster surge would haunt us for the rest of the game.
While none of us had drawn the best fighting characters I had gotten some really great equipment including a Tommy Gun!  So I figured I could deal with the monsters and moved to do so.
Mistake.
I got my ass handed to me and ended up in the hospital.  I spent much of the game trying to fight and failing horribly (damn you dice!).  I found myself in the hospital or the asylum pretty regularly.  During this time Bear was doing great.  He had gotten a bank loan and because he was the Photographer he also had a retainer.  He was rolling in dough so he zipped around the board buying up a truck load of equipment and spells to use.  As it turns out he should have been collecting clue token with some of those turns, but more on that in a bit.
During the later turns on the game we were really working hard, and struggling, to close gates.  That damn monster surge had made it hard to move around the board early in the game and when I finally got into the gate and closed it I found that I didn't have the Clue tokens to seal it.  So naturally a gate opened  again and I got sucked right back in.  This happened three times.  When I shut the gate for the final time it turned out to be the last action I would take before the end of the game.  We had waited too long and Nyarlathotep had awoken.

Now there are three ways to win this game.  1. Seal 6 gates 2. Close all Gates 3. Defeat the Ancient One.  Those are really in order from easiest way to win to the hardest so fighting the Ancient One is really a last ditch effort.  It is best avoided by going for one of the first two, but that just didn't happen for us.  Still, I felt that we were in pretty good shape to fight Nyarlathotep until I realized that Bear has Zero clue tokens.  As I mentioned his attack caused us some problems.  That is because if you have no clue Tokens you are Devoured (Dead and Eliminated from the game) so that happened to Bear straight out of the gate.  After two rounds Revil joined him and left just me and the Professor to do the deed.  The fight took a while, you have to get a number of success equal to the number of players in order to remove a doom token (which now act as the Ancient One's hit points).  Fortunately for us the dice turned around.  I was making my Lore check left and right which was a good thing as I went in with only three clue tokens.  The Professor was battling like a champ but was devoured with Nyarlathotep at 1 doom token left.  It came down to me with one clue token left vs him with one doom token left.  In the end I was victorious, but it couldn't have been any closer.


Overall the game was an absolute blast.  The expectations were high, but the game was more than enough to meet them.  Perhaps more than any game I've ever seen Arkham Horror has an insane amount of replay value.  With just the base game you get 16 investigators, 8 different Ancient ones, 67 mythos cards, 64 encounter cards, and three different ways to win.  If I have a knock on great games like Defenders of the Realm it's that the games always feel very much the same, but given the number of random factors involved in Arkham Horror one could play a dozen games and have them all feel quite different.  This all is to say nothing of the various expansions available for Arkham Horror which have board add-ons, new Investigators, Item Cards, Mythos Cards, Ancient Ones, and more.  To give you an idea of how much we are taking about if you were to buy all the expansions the number of Investigators you would be drawing from would jump from 16 to a whopping 48!
Arkham Horror has come a long way since the old 1987 version.  While I'm sure that game was good I can tell you that this game is great.  It very well could be my new favorite board game.  It mixes clever design with a multitude of choices, and the classic Cthulhu Mythos to create a real winner.  If you love board games and haven't already check out Arkham Horror.  I promise, you'll be glad you did.
Posted by Labyrinthian at Monday, February 07, 2011

By far my favorite board game ever!! Just finished up the collection last week, giving us all expansions, boards and cards. We play 1 or 2 times a week. Sometimes there is only 2 of us, sometimes up to 8. Amazing game, and a great face to face social activity. 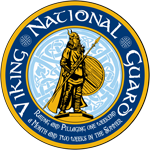